With the deleted DVD scene, I'm curious if Plutt's re-appearance will be saved for a future episode, especially given his appearance (only other character besides Ben) in Rey's vision. Most critically, that she was handed off to him as a small child at the moment when she's exiled to Jakku as a scavenger

I've read several comments about Plutt being the actual worst/most evil villain in all of the trilogies for being a pure capitalist. He controls the market on Jakku and can pay scavengers like Rey whatever he feels like for their hard earned findings. The writers make a point of showing that he constantly undercuts/cheats her and she has no choice but to swallow her anger because he's the only game in town. Further pointed out when he offers her 60 portions for BB-8 after trying to undercut her by offering 1/2 a portion for something which the previous week was valued at 10 portions.  I don't think he'll turn out to be a villain in the sense that he wants some kind of larger power, he's perfectly happy with screwing over the inhabitents of Jakku so that they're fed enough to be productive, hungry enough to work harder, but not so hungry that they'll eventually rise up and revolt against him. 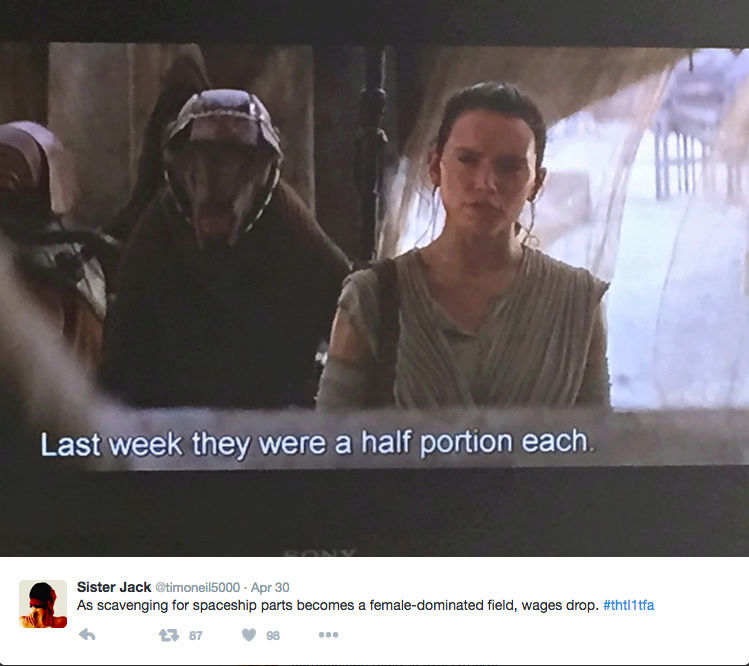 Some of us have speculated on here if he's a one off homage to Jabba and those sort of characters or if he'll return at a later date. I personally think he will given his appearance in Rey's past during the Forceback. He may not care about the larger issues and politics in play in the galaxy, but he knows something about how she ended up there. Beyond that, he sees her as his personal asset, a servant who works for him and belongs to him (the "hey that's mine! line can't just be about the MF). Other ideas I've considered is that he's like some of the classic opportunist/bad guy characters you see in classic literature when one of the characters is an orphan. Some of you have mentioned the Thénardiers as Cosette's "guardians" in Les Misérables. There's also Mrs Reed and Mr. Brocklehurst in Jane Eyre or Mr Bumble and Mr Sowerberry in Oliver Twist.

Personally I think he'll be back in the future when they start to unravel Rey's past. And as an antagonist/master she had to spend her childhood and adolescence against, a very good reason why she'll probably not be amenable to the idea of being under anybody's control/apprentice going forward. Final idea I wanted to write down is that with the hints being dropped about Jakku, my guess is that he's a bit of a snitch for the FO - possibly the person who tipped them off about LST and Poe's meeting, definitely tipped them off about Rey stealing the FO and having Finn & BB-8 with her, and if Rey's parents were on Jakku related to an artifact or secret Imperial stuff, he would've been involved as the sole seller/fencer for that planet.

Re: Unkar Plutt in Rey's vision/backstory and Future installments

Pablo has answered a couple of tweets recently about Unkar Plutt both fairly dismissive of his importance going forward, but that doesn't mean we won't see him again.

Here PH says that Unkar is probably still on Jakku because he has a good thing going there - https://twitter.com/pablohidalgo/status/788484583058657281