Strangely we don't have a topic on the original trilogy, even though I know several members of the forum like it.
Since today is the release of The Star Wars Archives: 1977–1983 by Taschen, I opened the topic.

My opinion on it. I saw the 2004 and edited version between AOTC and ROTS (who need to watch SW in order anyways

),
but I knew already that Vader was Luke's father and Leia was Luke's twin sister thanks to guide books. I liked the three movies but  I prefered the Jedi parts and I was pro-Empire because they were cooler. I cried at the end when I saw Hayden Christensen as a Force ghost and my child mind thought it was awesome how Georges had found an actor similar to him when he filmed in 1983.

With the Postology, I watched them with a new look and noticed a lot of new things but I think it would be best if Lucasfilm stopped being too much focused on it because there is a limit to the number of times they can retell the same story again and again.

I love this new style of animation but I want it used on new things. 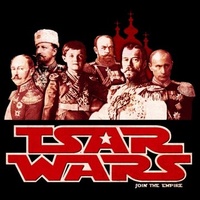 I'm reading "The Secret History of Star Wars" and there are a lot of drafts and early ideas from Lucas. One of the scripts is extremely funny:

Kane Starkiller, a Jedi-Bendu master, is in hiding on the Fourth Moon of
Utapau with his two sons Annikin and Deak, when a Sith warrior finds them
and Deak is killed. The surviving Starkillers head to the Aquilae system, where
they are met by Kane's old Jedi friend, General Luke Skywalker. Kane, whose
war-battered body is a concoction of artificial limbs, knows that he is dying,
and persuades Luke to become Annikin's Jedi teacher. He then travels to the
city of Gordon, leaving his son with Skywalker and the King of Aquilae. Clieg
Whitsun, a rebel spy on the emperor's planet of Alderaan, has learned that an
Imperial fleet, led by General Darth Vader and Governor Crispin Hoedaack,
is about to conquer Aquilae with a "death star" space fortress. Rebel fighters
are sent out to stop the attack, but the Aquilaean king is killed, and instead of
Princess Leia (the rightful heir), a corrupt senator takes over, surrendering the
planet to the Empire.
Annikin, Luke and Whitsun, joined by Artwo Detwo and See Threepio
(two bickering robots who have escaped from the space fortress), bring Leia
and her two younger brothers to the spaceport at Gordon, from where they can
reach safety. After a fight at a cantina, where Skywalker uses his "lasersword"
to kill his antagonists, the group meet up with Kane and his alien friend Han
Solo

who have arranged transport to a friendly planet. They need a power unit
for suspended animation in order to get past Imperial scanners, and Kane
heroically rips one from his body, causing his death. After avoiding a trap set
by Vader and Prince Valorum (the black Knight of the Sith), the rebels are
pursued into space, where the arguing Leia and Annikin realize that they love
each other. Their craft is damaged in an asteroid field and Whitsun dies as it
explodes, but the others abandon ship in time and land on the jungle planet of
Yavin, where Leia is captured by alien trappers. Annikin tries to rescue her, but
only succeeds in freeing five “Wookees” (huge, grey and furry beasts), and
Leia eventually ends up in the hands of the Empire.
After a tip from two anthropologists, the rebels and the Wookee tribe
(including Prince Chewbacca)

attack an Imperial outpost, and a forest battle
ensues. When he learns that Leia is held captive aboard the space fortress,
General Skywalker starts training the Wookees to fly fighter ships in order to
conquer the death star. Annikin is sceptical of the plan and gets onto the
fortress (together with Artwo) on a mission of his own, dressed as an Imperial
“skyraider”, but he is soon captured and tortured by General Vader. Valorum
sees this and realizes that the Imperials are completely without honour and
codes, and that he has more in common with the young Jedi than with the
emperor. Turning his back on the Empire, he frees both Annikin and Leia, and
they escape down a garbage chute. After almost being crushed in the garbage
receptacle, Valorum, Leia, Annikin, and Artwo manage to abandon the station
just before the Wookees destroy it, killing both Vader and Governor Hoedaack.
Back in her throne room, Queen Leia honours the heroes (including Valorum),
and Annikin is appointed new Lord Protector of Aquilae.

@special_cases
Oh, I read it too!
But it was in a comic form. 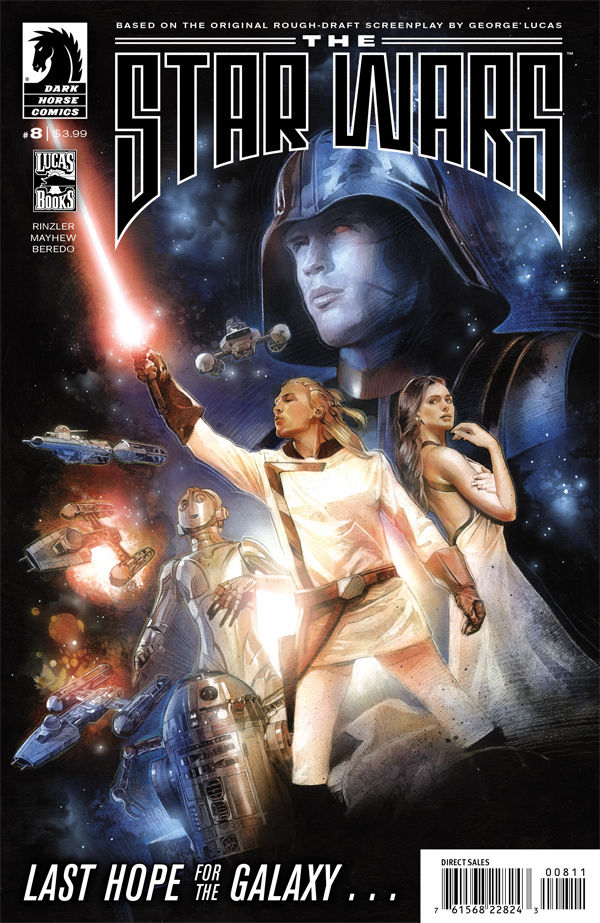 I liked that this Leia was a mix of Padme and Leia, and we could see some prelogy line so early in the draft.
It also looks like a really different story, and I really would like a sequel one day (maybe if Disney has ran out of idea).

@LadyGaufrette I'm impressed by Prince Chewbacca. Seems we were looking in wrong direction while choosing a prince for Rey.

I was reading stories about MoMa exhibitions and found this story

The performance piece, titled Blood Bath, preceded another anti-war artwork that more successfully entered the canon. The Art Worker Coalition’s poster, And babies? (1970), overlaid the text “Q. And babies? A. And babies.” on a war photograph by Ron Haeberle of dead Vietnamese citizens. The exchange came from a television interview in which CBS reporter Mike Wallace asked U.S. soldier Paul Meadlo how many people in a Vietnam village he and his cohort had rounded up and killed, on Lieutenant William Calley’s orders. Meadlo explained, “I fired them on automatic so you can’t…you just spray the area, so you can’t know how many you killed ’cause they were going fast. So I might have killed 10 or 15 of them.” Wallace asked: “Men, women, and children… and babies?” Meadlo famously replied, “And babies.”

MoMA initially agreed to distribute And babies? but ultimately pulled its support. New York lithographers printed over 50,000 copies of the Art Worker Coalition poster, and newspapers around the country reproduced the scathing poster and its graphic image.

Seems that this might have influenced Lucas, although he included literal "Men, women, and children..." in PT as reference to Vietnam war too.