Wuxia movies/romances that remind you of Reylo

Wuxia movies/romances that remind you of Reylo

Guys,I'm curious  have you watched Wuxia movies  which has romance that remind you of Reylo?

Others have more expertise, but I finally saw House of Flying Daggers the other week b/c it popped up on cable and am sorry that I missed it in theaters. It's so green and the shades are gorgeous, would've loved to have seen all of that on a big screen 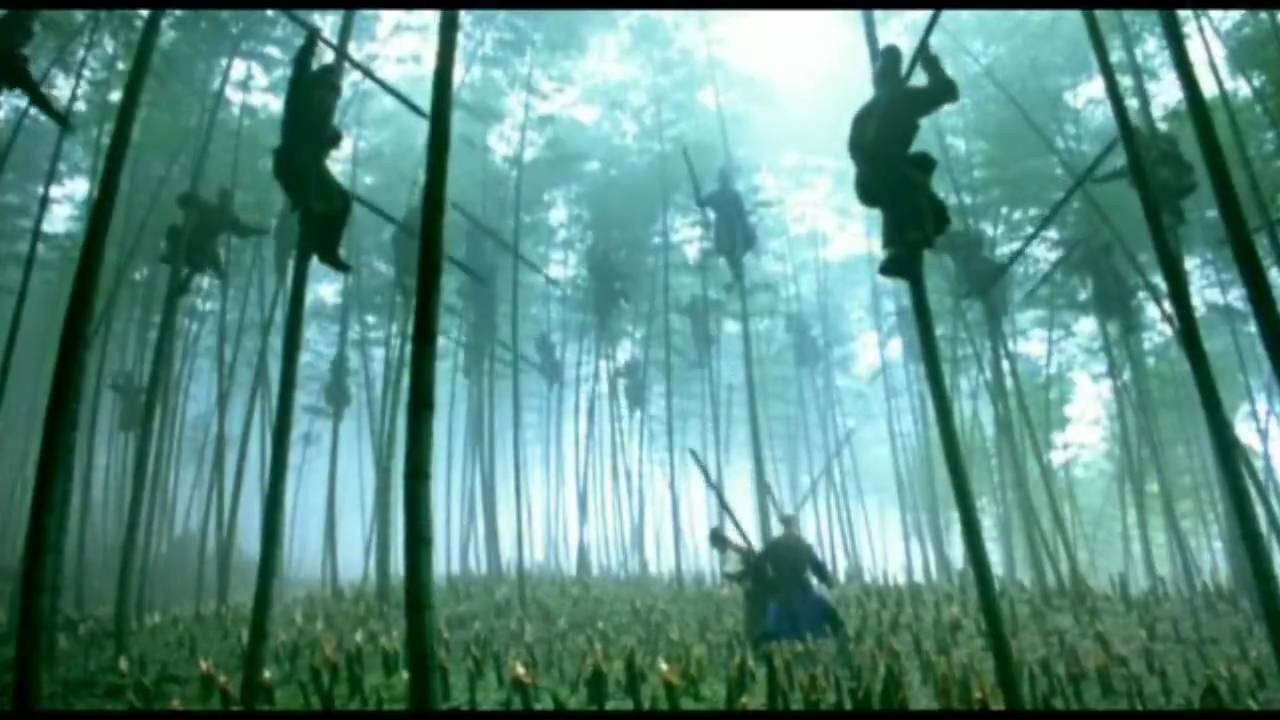 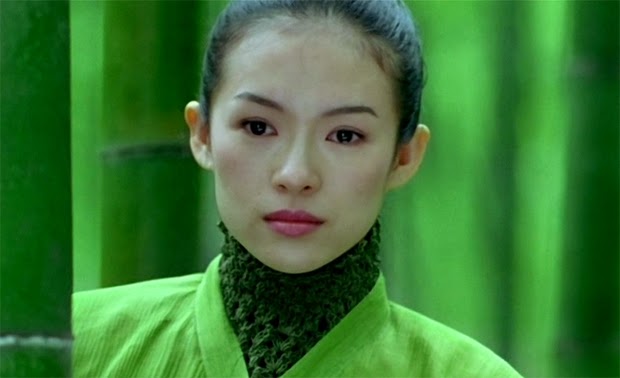 Other one as a Westerner I obviously thought of b/c it was in mainstream theaters is Crouching Tiger, Hidden Dragon w/Jen and Lo. Also gorgeous. I saw this in the theater with my dad and oddly enough I think he enjoyed it despite not being the type to like martial arts movies

It's about two  lovers who are assasins and who planned to kill the king of China(who would later become the First Emperor)but the male one spared his life because he wanted the king to unify China.Another assasin tricked them to fight and the male one lets his lover kill him(without her realizing that) because he loves her so much.The female realizing what she's done kills herself out of grief and the King becomes the First Emperor unifying whole China.

In ancient China during the Warring States period, Nameless, a Qin prefect, arrives at the Qin capital city to meet the king of Qin, who had survived an attempt on his life by the assassins Long Sky, Flying Snow, and Broken Sword. As a result the king has implemented extreme security measures: no visitors are to approach the king within 100 paces. Nameless claims that he has slain the three assassins and he displays their weapons before the king, who allows the former to approach and tell him his story.
Nameless recounts first killing Lone Sky, before traveling to meet Flying Snow and Broken Sword, who had taken refuge at a calligraphy school in the Zhao state. He tells Sword that he is there to commission a calligraphy scroll with the character for "Sword", secretly seeking to learn Sword's skill through his calligraphy. Nameless also learns that Snow and Sword, who are lovers, had gradually grown distant. Once the scroll is complete, Nameless reveals his identity and challenges both Snow and Sword to a duel the next day. Sword, who knows that the scroll has revealed his weaknesses to Nameless, makes love to his pupil Moon, but is seen by Snow. In revenge, Snow kills Sword, followed by Moon when she attempted to seek revenge for her master. The next day, Nameless kills the emotionally unstable Snow before the Qin army, and claims her sword. As the tale concludes, the king expresses disbelief and accuses Nameless of staging the duels with the assassins, as in the previous assassination attempt he had perceived Sword as a honourable man who would not stoop so low as to cheat on Snow. The king then suggests that what really happened was that the assassins volunteered their lives so that Nameless could gain the king's trust, which would allow Nameless to get close enough to the king to kill him. He then narrates his guess at what really happened.
In the king's version of the story Nameless had sought out Snow and Sword after staging the battle with Sky, telling them that he had acquired a special technique that would allow him to kill any target that is within 10 paces. Nameless explains that he can use this technique to kill the king, but to get close enough he must present Snow's and Sword's weapons to the king. He further explains that he only needs to kill one of them in public to "prove" that he has killed both of them. Snow and Sword argue over who should be the one to die, which results in a short fight in which Snow is quicker and manages to injure Sword. Snow then proceeds to meet Nameless before the Qin army while Sword, still recovering from his wound, watches helplessly as Snow is defeated. Moon then gives Nameless her master's sword, telling him that the swords of Snow and Sword should remain together in death as they had in life.
Nameless admits that he does indeed possess the special technique the king alluded to. However he states that the King had underestimated Sword, and tells the true story. Nameless says that the special technique, while deadly, can also be used to deal a seemingly-fatal blow that nonetheless misses all the victim's vital organs. He had used this technique on Sky, and now asked Snow and Sword to cooperate by faking a duel with him as well. He demonstrates the technique by showing that it is highly accurate as well as deadly. Snow agrees to the plan, but Sword refuses. Snow angrily accuses Sword of ruining the opportunity they had three years ago, when they had broken into the Qin palace yet Sword had refused to kill the king. She then attacks Sword, and manages to wound him with Nameless's help. The next day, Nameless "kills" Snow in front of the Qin army. Sword sends Nameless off to the Qin capital, writing the words Tianxia in the sand before leaving. Sword had not killed the king 3 years ago because he desired a unified, peaceful state, and only the king of Qin could achieve that vision.
The king, touched by the tale and by Sword's understanding of his dream to unify China, ceases to fear Nameless. He tosses his sword to Nameless and examines the scroll drawn by Sword. The king understands that it describes the ideal warrior, who, paradoxically, should have no desire to kill. When Nameless realizes the wisdom of these words, he abandons his mission and spares the king.
When Snow learns that Sword had convinced Nameless to forgo the assassination, she furiously attacks Sword and unintentionally kills him when he chooses not to defend himself so that she would understand his feelings for her. Overwhelmed with sorrow, Snow commits suicide. Urged by his court, the king reluctantly orders Nameless to be executed at the Qin palace. He understands that in order to unify the nation, he must enforce the law and use Nameless as an example. As the film ends, Nameless receives a hero's funeral and a closing text identifies the king as Qin Shi Huang.


[size=14]The Asians clearly arent afraid of exploring contrvoersial issues.I've noticed that in some of their movies espeically  in mangas their males tend to be very posessive and can sometimes be even rude and hurtful to the heroines whom they're secretly in love with or having their heroines kill themselves out of love.I mean can you imagine  the backlash the antis  would have created if ''Hero'' or the ''House of the Flying Daggers'' were American movies.

While it is technically not Wuxia since it is a Korean martial arts movie.... Duelist should be included.... the two protagonists reminds me so much of Reylo!!!!

This is the summary from IMDB:

Set years ago in the era of the Joseon Dynasty, the story follows a young police officer named Namsoon (Ha Ji-won) who, along with her fellow officers, discovers a counterfeit ring operating out of the area they've been assigned to protect. However, as the criminals aren't just printing up their own money, they also plan to use it to topple the economy and take down the government. As her investigative work continues, Namsoon soon makes the acquaintance of a young man known only as Sad Eyes (Gang Dong-won), for the way that he looks out at you from underneath his hair - he doesn't say much, but he's got that look and that's all it takes to pique Namsoon's interest in him, even if she shouldn't be thinking those thoughts about someone she might have to toss in jail. Of course, Namsoon can't deny her feelings even if the object of her affection belongs behind bars, and it's not long before she's starting to act on her emotions.

The girl is a cinnamon roll but is very aggressive when she fights... she is from a poor background, he is from a more aristocratic background....... the main guy is just like Kylo... there is no better way to describe him (he is an assassin and has an emotionally complex relationship with someone implied to be his father... he even wears a mask in his first scene)....the visuals are lovely.....the only thing I didn't like was that this movie has a sad ending (well.... partially)... 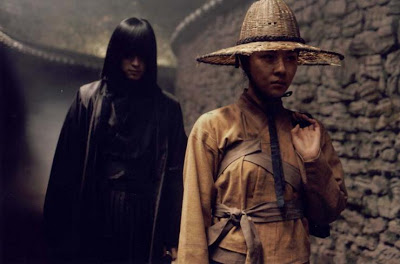 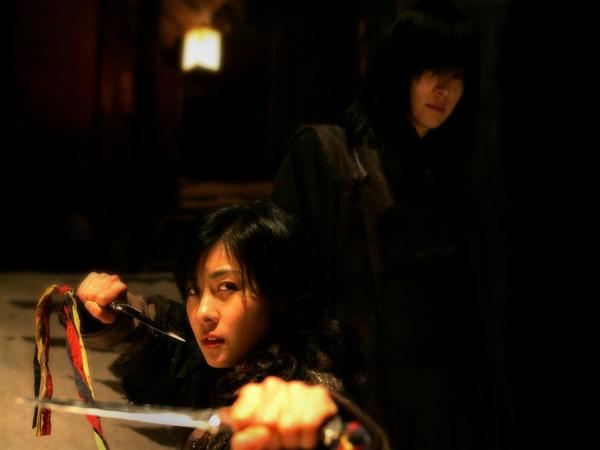 This picture make me think of Luke, Rey and Kylo

My friend says this movie reminded her of reylo, but cgi is everywhere