@skystar when you crossread the scene with what greek tragedy is supposed to be, it makes the most sense. it's unambiguously ambiguous. and you're right, it's very uncomfortable for that reason and i think to the extent that you *can* ride this kind of thing out in a blockbusting movie, it is ridden out. i'm in awe with the movie for that reason, because in that moment it takes itself very serious and succeeds.

the tragedy here is not in oedipus. it is in lauis, the clear villain of this story, the one who damned and hurt and cursed all around him. he who caused so much strife, and then left it all for his son to fix, for his son to struggle with.

but he did fix it.

oedipus was a fair and just ruler of thebes, a kind husband to jocasta, a good father to his children, from all accounts, since antigone was so devoted to him, and he was disappointed in his sons for their selfishness because that’s not how he raised them.

perhaps oedipus is a story of how our fathers, our predecessors, those who come before us will curse us and damn us and leave us more problems than solutions can be found

perhaps oedipus is a cautionary tale, and our tragic figure is not oedipuis, but laius, who made his own ruin, who’s spiteful hands left scars on all they touched.

oedipus is a tragedy, but only because it reminds us that our own undoing, our own unhappy endings, aren’t necessarily within our control. our own tragedies may not be our fault, may not be due to our mistakes, maybe we didn’t earn our unhappiness.

it’s not fair, and that’s the true tragedy of oedipus. that good, kind, clever, merciful people can do their absolute best, can show kindness and sacrifice and love, and in the end it won’t be able to save them from the mistakes other people have made.

oedipus was a good man, and a good king, and it may not have saved him – but it saved all those in thebes.

but the spinx was gone, their line continued, and thebes thrived.

the tragedy of oedipus is the idea that we’re not in control of our own destiny.

the triumph of oedipus is the idea that we need not control it in order to have a destiny worth remembering.

a pretty good rundown of what the tragedy of oedipus is.

and i think it also shows quite nicely how han is set up as someone who sinned against his son, which i'm not sure the movie actually supports.

Seneca wrote:Fate leads the willing, and drags along the reluctant.

One of the conceits of Greek stories is that our fate is set, and woe betide anybody who tries to defy theirs. Even the gods abide by it. In Iliad, Hector leaves the city to fight Achilles not because he wants to, but because he is fated to do so.

Stories like Oedipus Rex tell us that life isn't about having all the cards, it's what you do with the hand you're dealt. 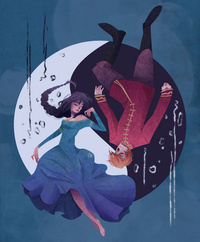 writing this will probably make me look like a deeply nerdy person (no surprises!).

i just finished listening to crime and punishment by fyodor dostoyevsky, a book that’d been on my reading list for ... ever (likely) and which ... was everything i wanted from a book.

the thing i kept doing whilst, tho, was all about seeing kylo ren’s journey in razkolnikov’s, and to compare the writing for the two. (i’m not the only one https://www.reddit.com/r/starwarsspeculation/comments/7od72v/crime_and_punishment_and_kylo_rens_throne_room/)

in my imagination, after the force awakens came out, kylo ren was going to be an equally compelling figure to razkolnikov, someone who’d murdered and lived with the consequences of his actions, someone whose youthful arrogance and despair and a kind of chutzpah had enabled a deed that was horrifying to them and others, something that estranged them from normal society.

razkolnikov is that kind of rare character, wilful and intelligent, very much living in his head and in denial of his feelings for a long time. him having a real actual theory how murder is something that is justified didn’t surprise me, it surpised me that his real limitation was to see how emotional he was himself, and how much his actions were dictated by his emotions.

dostoyevsky writes his story like a kind of early psychological profile, but he’s not clinical about it, he wants the reader to feel his motivations and see how misguided they are but also how they hold true for him all the same. dostoyevsky is compassionate at all times, which i don’t think i’ve relly witnessed to this degree in any other writer.

i think both TFA and C&P have in common the very intimacy of the murder, the way it is planned by someone who thinks they are in control. what i also feel is parallel is the way that to razkolnikov justifies his deed, by way of poverty, by way of some kind of übermensch theory of justice, not even anything about the ends justifying the means, but about wanting to be powerful and unaffected by conscience.

whilst listening i was very much reading that as a ‘dark side’, his reluctance to find himself guilty was a kind of dark side to me, and i wish the new sequel trilogy would explore that, rather than make kylo ren an out-and-out victim. it’s not something i’m really interested in seeing.

i know this is futile complaint but it comes to me anyway.

another thing that compels me and that i would love to have been explored is kylo’s relationship with his mother. in dostoyevsky’s story there is a wonderfully moving scene of them meeting and her son almost and sort-of confessing, his mother ending in a nervous breakdown over the quasi-revelation. razkolnikov is partly motivated through his family ties, through wanting to be able to support them and his poverty, as that of many other characters, makes for strong motivation. i would love to have kylo have a similar scene with his mother, content-wise. an understanding that he did what he did, it’s inexcusable, but he still loves her and that these things are irreconcilable. but we gotta strive for them anyway.

in a sense i think i’m fascinated with trans narrative, with being both at the same time, and finding raskolnikov struggling with being a good person (this is clearly also demonstrated in the story), as well as his misdeeds, struggling to make meaning, as an existentialist’s wet dream, sort of like nietzsche himself went from outright nihilism to existentialism himself. (it’s absolutely no wonder he loved dostoyevsky).

by way of conclusion i’d say, i’m intrigued by a narrative that avoids the cliché of being cleansed by love, and enters into the difficult journey of learning to love oneself.