Is Kylo Ren a virgin?

Re: Virgin!Kylo: Yea or Nay?

@snufkin wrote:All this stuff about Han in the original version, where he murders Greedo and has his "one in every port" moment of his lady friend sitting in his lap and then throwing a drink in his face when he calls her by another woman's name makes me wonder how much of an a**hole he'll allowed to be in the Young Han Solo movie. 'Cause it's clear from the original version he's not just meant to be this Steve McQueen type, but a complete and total jerk who lies to people he owes money to, is sleeping around and lying about that to different women, extorts Obi-Wan and Leia, and runs off after being asked to help. It makes sense that Leia says "he's not a nice man" and keeps him at arm's length once she realizes that he's interested in her and that she's attracted back to him. So we have the kid going in the opposite direction and likely also thinking he's being chivalrous to Rey by 'saving' her from those lowlifes in the Resistance and offering to teach her how to use her Force powers.

@Tex - ha, yes they did have that special moment in the Force, first for both of them!

@Cowgirlsamurai - the mods and longer old timers could probably explain better how the topic came up. Maybe back when people assumed that he disappeared when he was still a teenager, like 14-15 years old? Or simply as a "how much real world experience did he have before going full DS crusader" with talking to girls as one of the benchmarks.

Old-timer/mod here... From what I recall, this thread got started in good fun because way, way back, the amount of sexual experience that Kylo may or may not have previously had was a topic of frequent debate that came up often in other threads. Finally, someone decided to start a poll/thread and move the (fun) debate here.

There were even a few people (not us) who tweeted Pablo to get his opinion on the topic back in the day.

And it's understandable that there's been debate--what we got in TFA were conflicting signals (IMO). Dude is all covered up and seems to live like a monk, but on the other hand, he's practically undressing Rey with his eyes in that interrogation scene and saying ambiguously sexual things to her (that he may or may not be aware of how he's coming across).

Re: Virgin!Kylo: Yea or Nay?

My opinion:
Kylo Ren is not a virgin. A 30 yearold virgin?

Nah.
But I think he is in celibacy now, however not cuz of his beliefs of purity that most wrongly associate it with. The way I see it. I think he explored his darkside the first time he crossed to it quite ferrociously. Indulging into all aspectes of it quite unhinged and passionately with intensity...is something that falls well in the charachter of Kylo Ren. He just give all of him self in search of fullfilment of his preconcieved notions of what might bring him peace of mind, as in absence of conflict he always feels that tears him apart. So yeah free unhinged unconsequentional sex goes very very well with powertripping that I am sure his younger self succumbed to at one moment in his desire to destroy all the lightness in him. It is the allure of the Dark Side. Some men stay lost to it, others feel the pull to the Light Side despite all bad s*** they do or did. So yeah...he explored all aspects of his darkness (not that sex is darkness, quite the contrary...but it can be an excellent means to express it in oneself). However...i think he got bored of it at one point cuz powertripping has only short term gratification for men (women too but now we talk of Kylo) who are so wholeheartedly superior to all rest. IMO...he lost desire to share that part of him with unworthy weak women. And let's face it. Most of them are....cuz you know...they are not Force Sensitive.

@Tex wrote:Ha, this topic was just on my mind. I'm in the "he's dabbled here and there" camp. I just can't see him being a virgin. He says and does to many suggestive things to make me think otherwise.

If I'd had any doubt, the "We'll see" *wink* pretty much cemented it for me. At the very least, he thinks he knows how to flirt.

Don't most men think they know how to flirt?

@Tex I know a couple 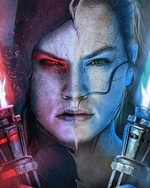