Discussion: Rian Johnson at the Helm of a New Star Wars Trilogy

So much Knives Out press, he talks a little SW here, though he can't say anything about his new films. But he didn't like ESB the first time he saw it, interesting. He would've been, like, six.

Adam is at TIFF as well, there's so many pictures and so much press, I'm not even going to try carrying it all over.

Younger people are surprised to learn The Empire Strikes Back wasn’t the consensus “best Star Wars movie” until maybe even the ’90s. It was polarizing for quite some time.

The trajectory of The Last Jedi reminds me of that.

I’m a little wary to talk about that, because I don’t want to sound like, I don’t know, like I’m defending anything or something.

I don’t think you have to defend anything.

So, I’m a little wary that even I answer one question about it, and not on you, but then a thousand other outlets suddenly pick it up and it’s like, suddenly, it looks like it’s just all talking about Star Wars.

Right. As opposed to everything we just talked about before this.

That’s the thing. But, as a kid, I distinctly remember being disappointed by The Empire Strikes Back.

Was that the first one you saw?

That was my first one.

Me, too. Because you couldn’t just “watch Star Wars” like now. It’s whatever was in the theater at the time.

I think my dad took me when I was really young to see A New Hope. Yeah, no, I remember, especially in the context of Return of the Jedi, which as a kid I adored. And so, yeah, I remember very vividly. But then Empire slowly became my favorite one. Look, man, same about you, we were in our twenties when the Prequels came out.

The weird thing about Empire was I had the toys before I saw it. All the older kids had been telling me how fun the original Star Wars is. Then Empire is released and my parents take me and it’s like, what the hell was that?

Luke gets symbolically castrated by his father.

As a little kid it’s like, I thought this was supposed to be fun?

Yeah. It sticks. That’s why that’s the one that, even though at that time I had that reaction to it, it stuck in me and it resonated with me. I remember the Prequels, that acrimony of the prequels. I think people forget exactly the tenor of the danger. We remember because we were in the thick of it. So, I mean, I don’t know. I think that anything with a passionate following always has a passionate following and Star Wars is that, even more so. You can’t be angry at one side of it when it’s also the reason the positive is so passionate, you know? It’s all part of the same thing and it always was like this basic thing. That’s why I love it.

So here’s a lot easier question.

Your upcoming Star Wars movies, how do they end?

[Laughs] I’ll tell you exactly how they end! An iris shot to a blue credit.

So, look, I realize how guarded you are about your upcoming Star Wars movies, but do you know exactly what they are yet? When they are set. Exactly what it will be?

I’m where I can’t say anything about it. Still completely in process with it.

Does that ruin your process if you say anything?

It’s just, I don’t know. “It’s a process” means it’s a process. So that means it could change, it could shift. There are a bunch of moving parts with it.

Lucasfilm were so happy with Johnson’s film they’ve hired him to helm a whole new Star Wars trilogy. He says, “The truth is they’re still figuring out their schedule, their game plan, so if it’s possible for me to squeeze in another film before or while working on that, I will.”

LF still figuring out their release schedule doesn't surprise me, but it does make me question the D&D stuff even more now. I bet Rian could fit in another movie, if his first new SW film isn't set for release until, like 2024.

I was doing a research about entertainment lawyers, and I stumbled upon this. The information was provided by the lawyer himself, so it's 100% that Rian and Ram signed a deal, and if they signed a deal, LF can't just drop off them without compensation. All things considered, it's very interesting that Kiri moved to their new production company. I'm dying to know what really happened. 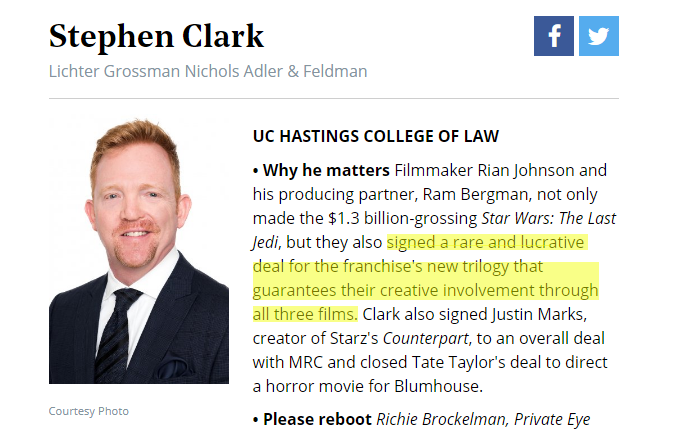 To further add to the "Why didn't the studio do whatever was humanely possible to get the guy who's second to Carrie Fisher in driving memes/positive viral engagement to write/direct IX?" question, he's now been included as a character in a Saturday Night Live sketch 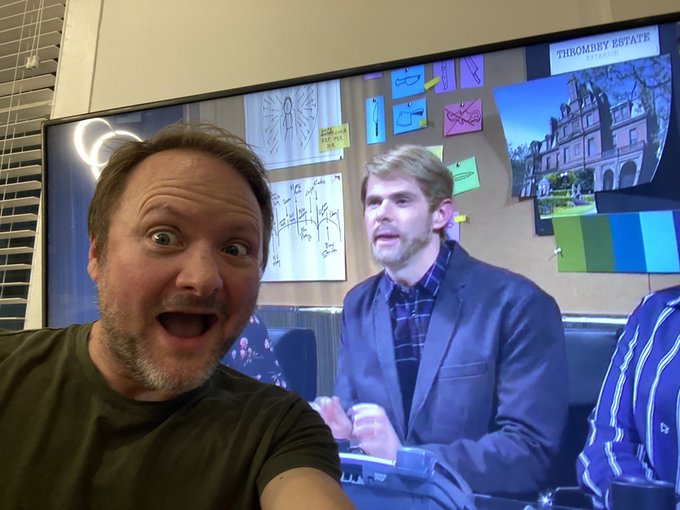 The previous agent lawsuit threw a wrench into a lot of things (probably why news of his trilogy was so scattered, there was nervousness about it.)  Now that it has been settled in Rian's favor (only last month), hopefully we'll find out more about his trilogy soonish (maybe SWCA).  If nothing, I actually think Rian decided SW is no longer for him.  If it's happening, there will probably be silence until SWCA, or close to that time.

Due to his lawsuit, he probably could not have touched IX until now, so with pre-production beginning this year, a theatrical release not until 2022, at the earliest, which is 4 years between movies.  However, the lawsuit could have gone against him, and not knowing how the lawsuit would have gone years ago, I can understand why DLF did not want to wait...BUT they should have told JJ to have fun with WB (take a hike), versus feeling calendar panic, and found a new writer/director for a release this year.*  (likewise, another option was to cancel the movie, with a statement "too difficult to do without Carrie", and they should have released a comprehensive Art of book).

*As an aside, if Disney does not have any movie crossing a billion this year (or only 1 or 2), this will be a factor that will cause a reflection about this.  Now, if none of the studios cross a billion this year for a movie's $$$$ (because of many factors, including coronavirus), then they won't.

I really wish Rian could do a standalone Ben Solo film. Post TROS. If anyone could bring him back in a way that made sense, Rian could.

As for Rey.... according to screenrant Daisy stated she didn't want to come back without Poe and Finn, so much as I love Reylo, Ben would have to have a new love interest.