I thought it seemed familiar!

Did I mention how much I like Matt Martin? Reading his tweets is always fun. LF should have never sidelined the Story Group for TRoS. Big mistake.

You can tell with people like Matt Martin or Rian Johnson only by following them on Twitter that they have curious and quick mindS. TRoS is definitively not the work of such minds. It’s just plain dumb. 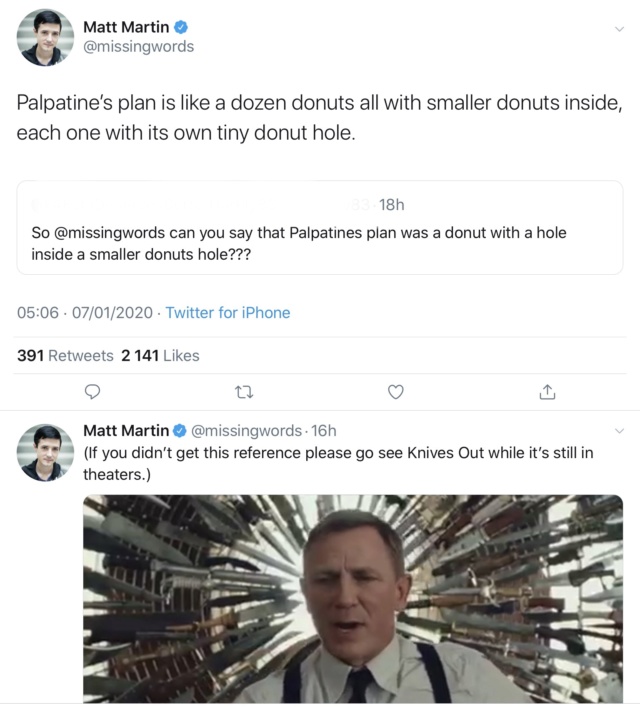 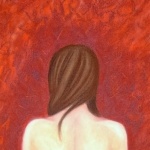 @SanghaRen Yes, people have been awfully harsh on him and anyone who asks him question about canon anymore. Like every person from LF who's still on social media is personally to blame, and they all lie, and they don't care about canon. But these are just the only people we can directly communicate with, so they get to take all the blame and it's rather unfair. Especially when you can tell people like Matt didn't even like the movie, or even didn't work on it at all.

This makes me so happy! Adam with a personal "thank you" to everyone who helped his AITAF organization in honour of Ben Solo! He knows how much people love the character and his performance!

Sorrynotsorry, but I can’t stand that people are spamming Matt’s “Well done Star Wars fans” fundraiser retweet with “Uhhh... you mean Ben Solo/Reylo fans!” comments. Dang, it’s for charity and he’s trying to be inclusive. And the people dragging JB in the comment section of Joonas’ retweet...? Why bring up that drama again? Joonas’ intentions are so pure, I’m sure he doesn’t want to hear about it. (It IS funny that he tagged John in the BenSoloChallenge in light of recent events, but let’s just keep it to ourselves, no?) 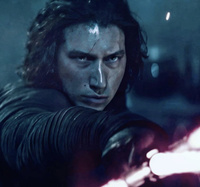 @Cowgirlsamurai wrote:Sorrynotsorry, but I can’t stand that people are spamming Matt’s “Well done Star Wars fans” fundraiser retweet with “Uhhh... you mean Ben Solo/Reylo fans!” comments. Dang, it’s for charity and he’s trying to be inclusive. And the people dragging JB in the comment section of Joonas’ retweet...? Why bring up that drama again? Joonas’ intentions are so pure, I’m sure he doesn’t want to hear about it. (It IS funny that he tagged John in the BenSoloChallenge in light of recent events, but let’s just keep it to ourselves, no?)

Lol just got done saying this in fan fatigue! I get the salt to a degree because they want to make it clear that these fans who are constantly degraded got this done, but I agree that there's a time and place. Let's not scare people away from donating to a good cause. 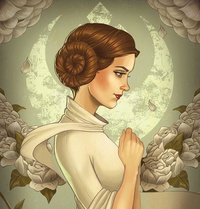 @MindAndMagic wrote:This makes me so happy! Adam with a personal "thank you" to everyone who helped his AITAF organization in honour of Ben Solo! He knows how much people love the character and his performance!

@MindAndMagic wrote:This makes me so happy! Adam with a personal "thank you" to everyone who helped his AITAF organization in honour of Ben Solo! He knows how much people love the character and his performance!

It's actually amazing to see him on social media, so it's obvious he's been genuinely touched by the gesture.

I hope antis sit up and take note of this.

The more I see of Joonas the more I like him.
I'm sorry Ben and Chewie never got to reconcile.

Hi guys, I moved the posts about John

in the Fan Fatigue thread, let's talk about it there. Thanks. 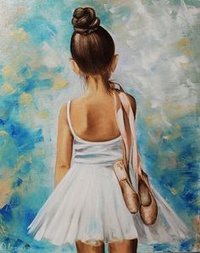 @motherofpearl1 wrote:The more I see of Joonas the more I like him.
I'm sorry Ben and Chewie never got to reconcile.

Yesterday's twits were such a breath of fresh air of positivity! He's smart in creating his image of a joyous, humble, inclusive and positive family man, with whom many middle-aged SW fans with children can identify. A worthy heir of Peter Mayhew! In the long run, having in mind his career prospects (there's lots of potential for future Chewie apereances with Disney), I'm positive it will be rewarded. He could have been just a body, but he made the fan favorite role his own. 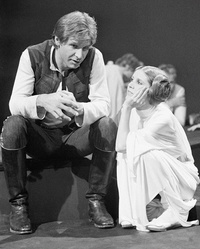 I agree with you there, Peter put so much of himself into Chewie I never thought anyone could replace him, and Joonas did an amazing job.

If they ever made a spin off with Ben I'd love it if Joonas came back! 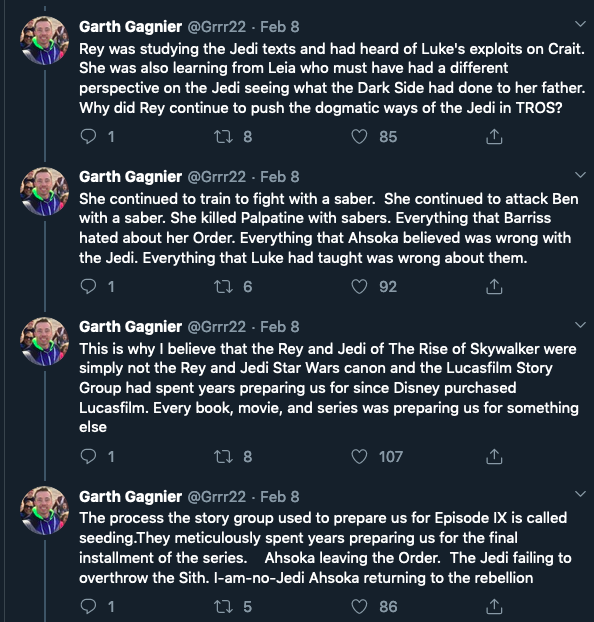 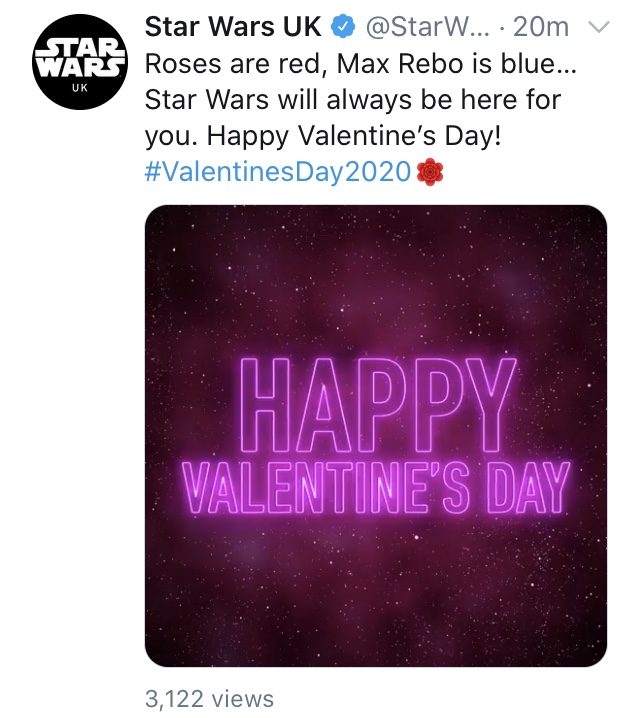 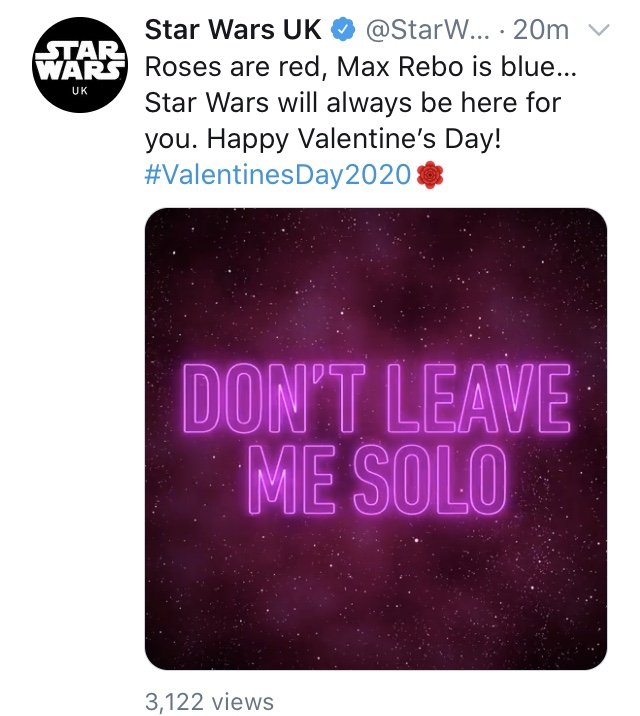 In all seriousness I'm proud of this fandom....we may rant on our forums and Tumblr accounts but we don't lower ourselves to the vileness so called fans did regarding TLJ.

Wow, great pun, very funny tweet.
I assume this is LF´s special sense of humor. The same kind of "humor" which told me Ben Solo´s story is "fun".
Okay, maybe LF and I have simply a quite different sense of humor, at least recently.

It kind of reminds me of years ago when Marvel comics chief Joe Quesada decided to erase Peter 'Spiderman' Parker's marriage to MJ Watson with a truly ridiculous plotline involving Parker making a deal with Mephisto to save his ailing aunt.
The furious backlash it got was on a par with TLJ hate, but what I remember most was Quesada actually did it because he personally hated the Parker/Watson marriage, and repeatedly said he enjoyed making fans mad.

Someone in DLF seems to like taunting reylos, either that or they are genuinely pig headed enough to honestly believe that the SW saga ended on a high note.

Their belief system seems to be:
We didn't kill off the Skywalker name....Rey has taken it. Only it's the bloodline that counts more than the name, Leia was an Organa, Ben a Solo. And it might have been ok if she was a nobody, but she's not. She's a Palpatine. So therefore, Sheev won. His aim of wiping out the entire Skywalker bloodline was achieved. Not hopeful.

Ben died saving the woman he loved, just like Jack in Titanic. Romantic, huh? Actually, no. Because what made Jack's sacrifice in Titanic moving is that ROSE MOURNED HIM. That entire scene worked because of Kate Winslet's performance, not Leo DiCaprio. Rose mourned Jack her entire life, and the only reason she married someone else was because Jack wanted her to live and have babies. Rey cried for about five minutes then promptly forgot the man who saved her life at a cost of his own. Not hopeful.

Ben had to die, because Anakin did. But Anakin 'died' when Padme did. Darth Vader was a hollow man who existed purely to serve his master. He had nothing to live for. He gave his life to save his child, Padme's child. His spirit then soared to find Padme again, and his line - and hers - continued through the twins. Ben was young, childless, with everything to live for. Kylo Ren wasn't who he became, he was, to quote the TLJ novel, the shield he pulled around himself. Ben did not want Hosnia massacred. He wasn't a war criminal. In fact, you could blame Luke as well for what he became. Luke blamed himself because as Rey said, he created Kylo Ren. Killing him off served zero purpose. Not hopeful.
And finally.....look ladies. We've given SW a female protagonist at long last. No, DLF. You've given us an ideal, an empty, unrelatable cardboard cut out who was once Rey of Jakku. You've regressed her character, reduced her to a soulless creature it's impossible to like or identify with, you've established she and Ben need each other and then taken away her soul mate. Rey ends up where she started, alone on a desert planet, burying the sabres that represent the children she'll never have, the family she'd longed for. You have ended the greatest space opera ever made on the gloomiest note you could have. SW is destroyed. You can give us a thousand spin offs, computer games and theme park rides, but they wil never ever make up for what has been lost.
Not hopeful DLF. Not hopeful at all.

I often remember what Virginia Woolf, as a character, said in the film The Hours, when asked why someone has to die in the book (she's writing the novel Mrs. Dalloway).

"Someone has to die in order that the rest of us should value life more", she says.

That's what Titanic showed very clearly, in ample of screentime, with collage of pictures of Rose's life afterwards (heck, the whole movie is framed with the ageing protagonist narrating), and that's why that is one emotionally satisfying movie. Its defying song is My Heart Will Go On, fcs.
Chris Terrio can stick his screenwriting Oscar and his thesis on Virginia Woolf you know where, cause he didn't learn anything.

Have been hearing this for a few hours now : 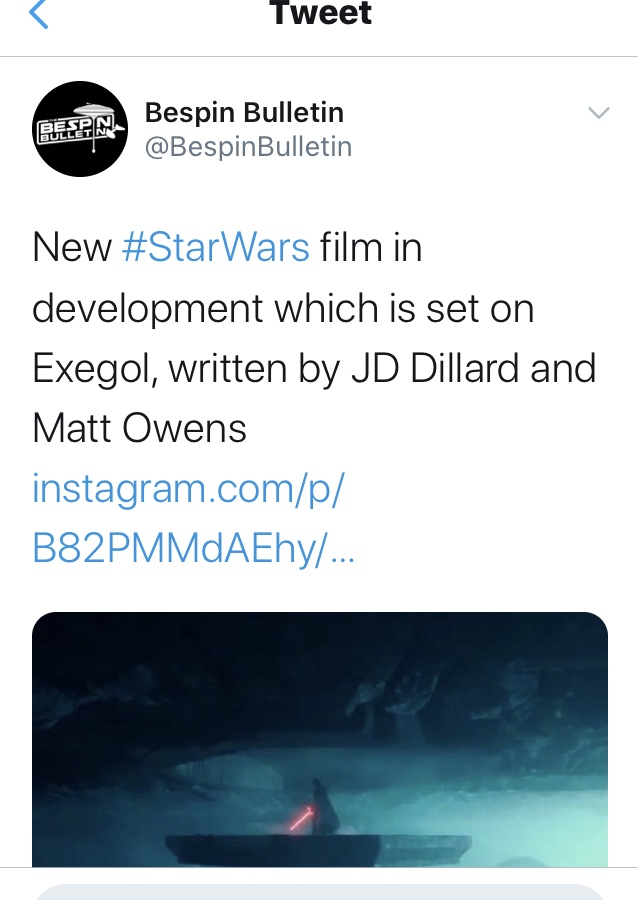 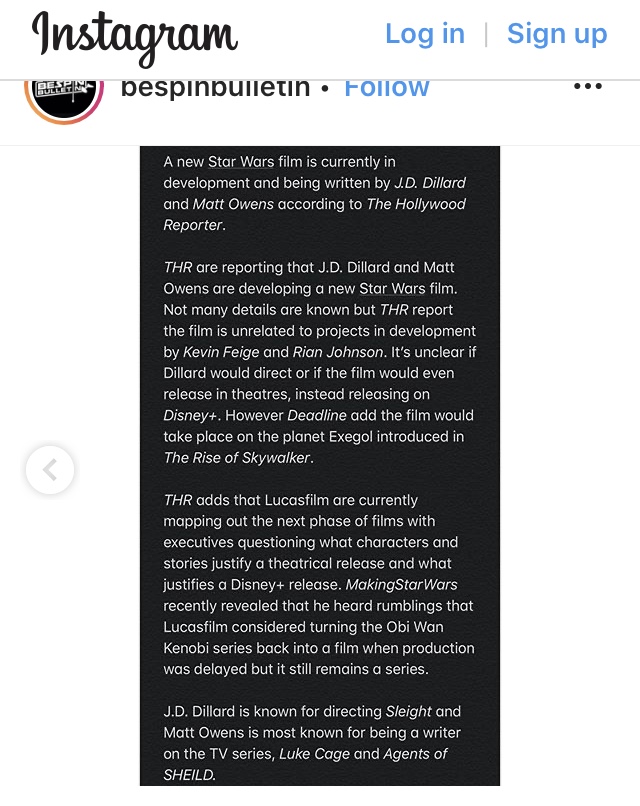 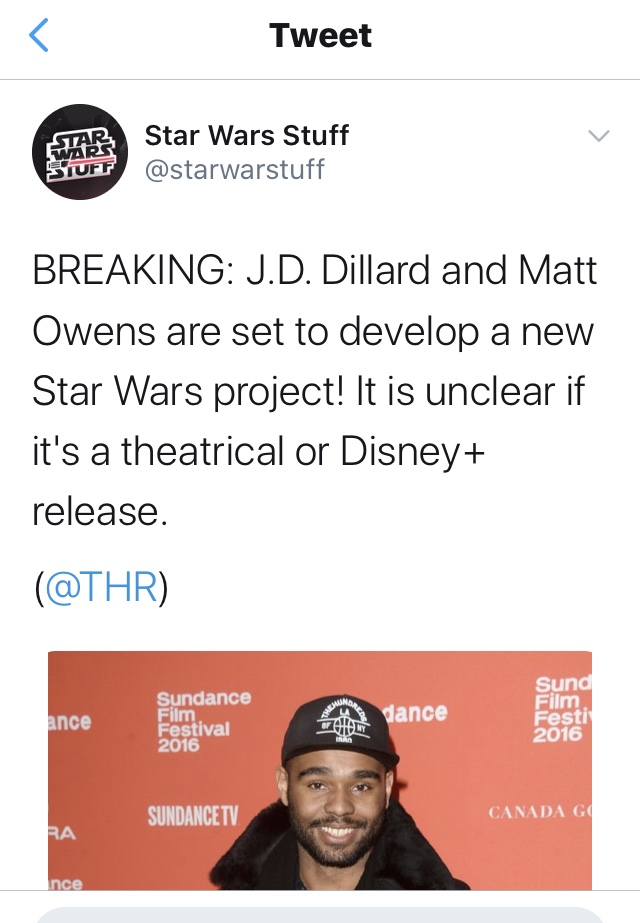 This seems more like a TV series to me.

And possibility of his return again : 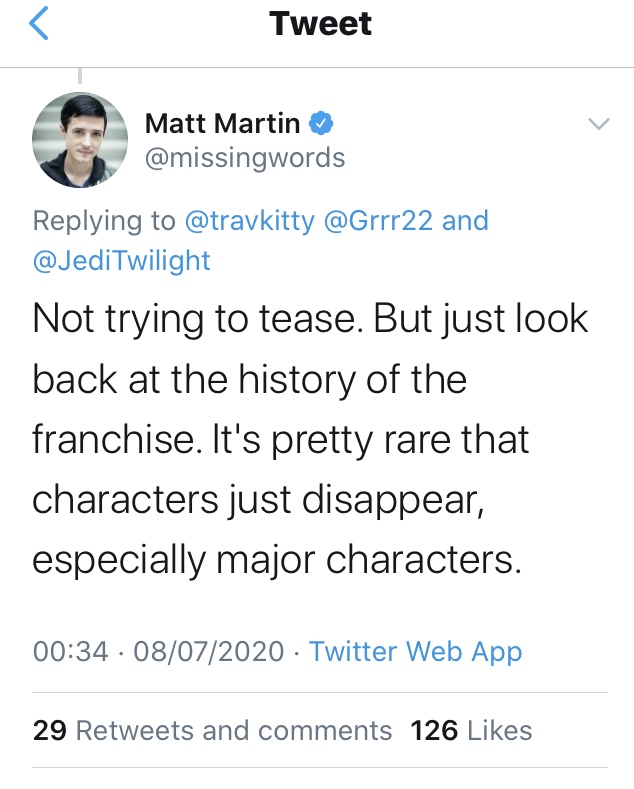 That would be cool.
I don't know if Adam would be interested in returning at the moment though, considering everything, but I suspect he might if Rian was involved.
And he has a genuine respect for reylos post the fundraising they did for AITAF, the fact that he went on SM when he loathed it to thank them shows that.

I'd be happy with a good comic/book series myself if the writer was decent. And if they had the same artist as TROKR.

It makes me think about those rumours we had earlier this year about a film/tv series set on Exegol - see above . Could be a connection . No one is ever really gone in Star Wars and with the force dyad anything could be possible .

I couldn't see anyone other than Adam playing Ben though!